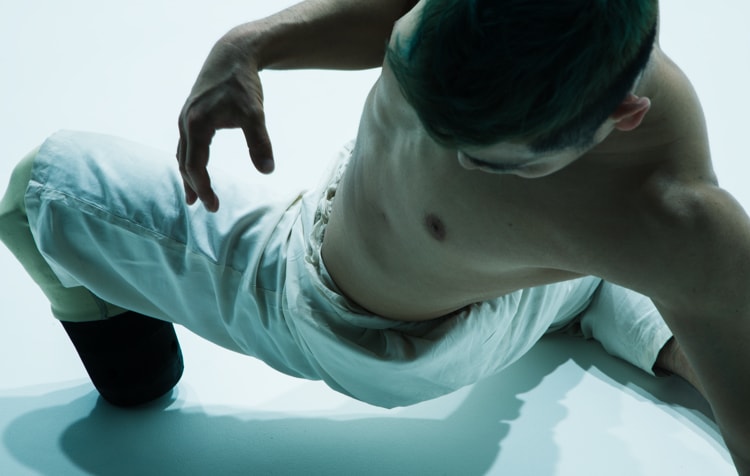 Dancing in My Own Way
The Dancer with the Prosthetic Leg, and His Journey to Become an Artist

New Year’s Eve last year, how many of you watched the NHK Kohaku Uta Gassen (Red and White Singing Festival)? Specifically, Ken Hirai, who showed up as the 16th artist for the White team and sang “Nonfiction”?
And did you see the man dancing in the white outfit—a man missing his left leg, below the knee? A man dancing in a way that didn’t feel rehearsed. It must have been choreographed, of course, but it seemed so much to be alive, to express something deep and powerful and emotional.
“Is life pain? Is success everything? All I want, all I want is to see you.”
He dances as if in struggle, as if being washed away, as if floating, or as if being saved, in the midst of an incredibly emotional ballad full of deep conflict, a song that seems to be about life and death itself. You can’t look away.
His dance no doubt struck a chord in many people, there in the last few hours of the year.
Koichi Omae, the dancer with the prosthetic leg. Or more simply, an artist that uses his own, singular body as his mode of expression.
Why are we so moved by his dancing, his movements? Is there a reason that is definable, describable? 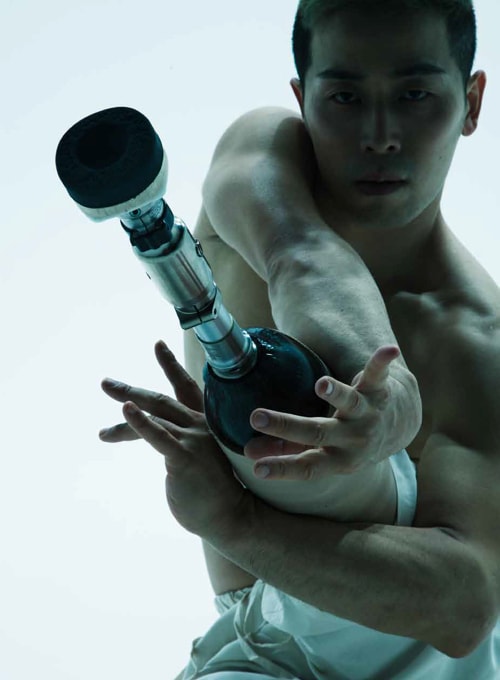 Now I can say confidentlythat I move better nowthan I did when I had all of my left leg.
Late March, in a studio located in Shinjuku City, Tokyo. The dancer shows up right on time. He takes a moment to rest, then goes to the edge of the room and begins his preparation. Arms, shoulders, back, hips, legs—he stretches each of his muscles and joints then relaxes them, one by one, as if checking to make sure they’re working. The whole process takes about 20 minutes. When he’s done, he comes over, and we have a short meeting about his outfit for the shoot, his prosthetics (a long one made of metal and a shorter one made of rubber), as well as the music to play in the studio (ballads, not dance music). So begins the photo shoot. He stands tall, spine straightened, in the middle of the studio. Then, his chin begins to move, followed slowly and gradually by his whole body. His whole body folds in on itself, arms and legs undulating and tangling amongst each other, his back and hips distorted. But then suddenly he jumps as if released, using his left leg as a pendulum to turn and build up enough momentum to do a backflip just on his right leg. He falls onto the floor as if crumbling, then lifts—twists—himself back up. His dancing is unpredictable. There doesn’t seem to be a set pattern, both in his movements and in the rhythm itself. After the sequence is over, Koichi speaks.

“My dancing isn’t about the beauty of the body stretched out, of beautiful curves and lines. It’s because I see more of myself in the body when it’s shrunken, tangled.”

After a few more sequences, he speaks again.

“I want to be misshapen. Distorted.”
I feel, suddenly, as if I’ve caught a glimpse of the depth of Koichi Omae as a dancer. The photo shoot, which took approximately an hour (enough for a slight sheen of sweat to be visible at the nape of his neck), comes to an end, and we sit down to talk. I am, of course, interested in what he meant by “distortion.” It seems to me that something like that isn’t compatible with a pre-choreographed dance. For instance, classical ballet. Their posture pin-straight all the way down to the tips of the toes, their movements rhythmic repetitions, their posture stable and beautiful. And then there’s Koichi, who tells me he wants to be shrunken, misshapen, distorted. What does it mean?

“I say dance, but dancing for me is very different. In a nutshell, that kind of physical expression is what suits my body. Of course regular dancing is better when there’s stability—it makes it easier to watch. Especially when you’re on a stage, dancing that seems unstable just makes the audience anxious [laughs], and so dancers don’t use elements like that. But in my case, if it’s for a photo shoot, or even just in front of an audience, where people can see me up close, I want to use my body to express things in distorted ways. It’s only recently, maybe a year or so ago, that I became sure of this. Until then, my dancing was very structured and stable.”
“Very structured and stable”—for instance, his performance at the Closing Ceremony of the Rio 2016 Paralympics. In that huge stadium, in a setting watched by people all over the world, he performed a high-level, fast-paced dance that included four backflips in a row. It was, according to him, a “dance that was easy to understand.” It was flashy, and fun to watch. And very different from the dance he did in the studio, and the one he performed in the Kohaku, where he seemed to be stripping himself down to his core, expressing his nakedness. Of course, there was a long journey, and many things that happened, to get him to this point in his artistic expression.

About twenty years ago, Koichi Omae was in high school, and his dream was to be a musical theater actor. He did part-time jobs like newspaper deliveries to earn money for dance lessons, and studied theater and ballet in university. After graduation, he began performing in theater as a dancer, and learned about a dancer and choreographer known as Jo Kanamori. Jo was exceptionally talented, and had had experience performing with foreign ballet companies. At the time, he was also slated to oversee a new dance troupe for a theater, and was accepting members for it. Koichi knew he wanted to dance under the guidance of someone he admired so much, and applied to enter as a first-generation member of the dance troupe in 2004.
Right before his final audition, however, he got in a car accident. His left leg was amputated below the knee. But he didn’t give up. If he could walk with the prosthetics, then surely he could dance too. He started his training from scratch, made improvements to his prosthetic leg, and auditioned for the same dance troupe. Again and again he auditioned. Four times in four years. But he was never accepted.

“I was obsessed with getting into that troupe. Like if I didn’t get in, everything I’d done so far would have been for nothing. But when I failed the audition, they told me, “You can’t be a professional dancer. You can’t join us.” I felt, at that moment, as if I had no future. I’d spent four years working so hard to move like an able-bodied dancer. But in reality I couldn’t keep up, or my leg would start hurting halfway through. I’d started to have an understanding of my own limits. So I gave up. I gave up, but I’m someone who hates losing, so I started thinking about how I could reclaim my identity as a dancer through some other method. It took a lot of time and confusion to get to that point though.”
Now I can say confidently that I move better now than I did when I had all of my left leg.
“What would be the best way for me to make it as a dancer?” His turning point came during his time in the troupe “Alphact,” which he is still a part of today. His left leg had been aching during one of his lessons, so he’d taken off his prosthetics and was dancing only with his right leg. One of the other members commented, “Man, that’s really natural. It looks great.” His first thought when he heard that was, “What is he talking about? Dancing like this would be like showing off to people that I have a disability.” But he still decided to go out on stage without his prosthetics. He didn’t fully believe what his troupe members were saying, but he must have felt instinctively that it could be true. And indeed, the dance he performed without his prosthetics was more highly acclaimed than anything he’d ever done before. That was the moment he thought—this might be it.

“It was something I started seeing gradually, as I was dancing. A way I could be independent as an artist, and perform at the same level as able-bodied dancers. This gave me confidence and became somewhere I could place my hopes. It also gave me the strength to let go, gradually, of the obsession I’d had until that point. Now I can say confidently that I move better now than I did when I had all of my left leg. The imbalance between the right and left side of my body distorts my movements and causes strain, and I have to figure out all on my own how to maintain and take care of my body, and how to train and build muscle. Of course, I’ve also experienced a lot of injuries and failures. But going through those things has allowed me to think more deeply about my body, and have a better understanding of it. I can’t do the kind of dancing I wanted to do initially, but I can dance well now in other ways, and I can express things as an artist that only I can express.”

Not a dancer who is good despite his prosthetic leg, but an artist who dances in a way just his own. This dance is not stable, but unstable. Not defined by straight lines, but distorted. An unbalanced, misshapen dance. When we watch him dance, we’re watching something original, something that’s becoming deeper even now. Recently, he’s also expanded his repertoire for more comprehensive performances, trying his hand at acrobatics. Without precedent, always trying to move forward. His dance is like a living, breathing representation of him.
Performance at the Closing Ceremony of the Rio 2016 Paralympics. Koichi (center left) danced, performing alongside amputee model GIMICO (center), as well as Akira Hiyama (right) and others from “Dialog in the Dark,” a workshop that allows people to experience what it’s like to lose their eyesight. This performance drew considerable attention.

Born in Gero City, Gifu Prefecture in 1979. Started taking ballet classes in high school, and studied ballet at the Osaka University of Arts as well. In 2003, he was involved in a car accident and had his left leg amputated below the knee. Since, he has worked tirelessly to express himself through dance. Has performed at many events, including the Rio 2016 Paralympics and the NHK Kohaku Uta Gassen (Red and White Singing Festival). Changes his hairstyle every three months to revamp his image.