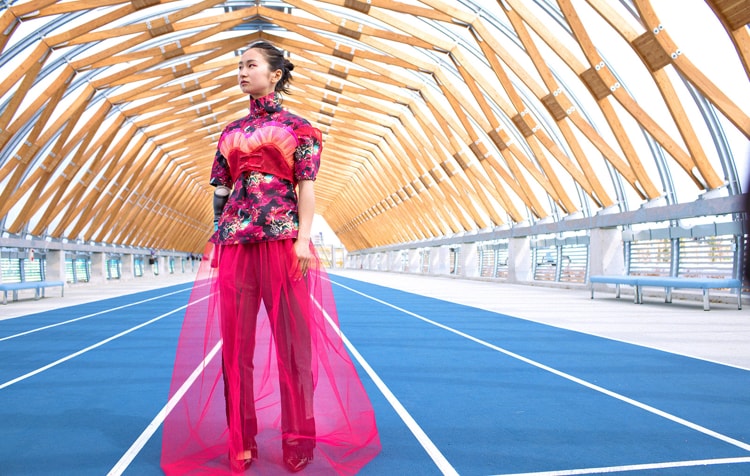 She placed sixth in the World Championships only six months after starting training in Para athletics. The following year, at the Rio de Janeiro 2016 Paralympic Games, she won a bronze medal in the Women’s 400m T47 event. Today, she has her eyes set on winning a gold medal in Tokyo at the 2020 Paralympics. The name of this sprinter of rare talent is Sae Tsuji. She was born without a right forearm, from the elbow down, due to a disorder called congenital forearm deficiency. A girl who was once focused on overcoming “things that she could not do” became, in time, an athlete who pursued “things that only she could do.” Today in this interview, we trace her past to discover where she finds her power to open the way to the future. 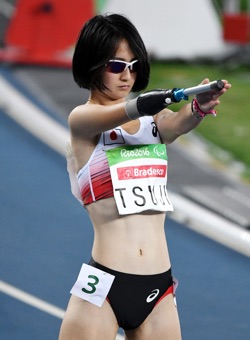 The long and short of it is that I can’t stand losing. That’s why I can become voracious about things like that. It feels really good to do things that go beyond what others expect. It’s a feeling like, “Ha! Did you see that?”
Handball is a team sport, while track and field is an individual sport. What did you find the hardest after you changed to athletics?
Focusing on myself. When I was playing handball, I was the game captain. So, I often played in accordance with the condition of my teammates. I made a lot of decisions based on how things were going around me. I would look at the expressions on the faces of different teammates, listen to them, and see how they were moving. I adjusted my plays accordingly. In athletics, you have to focus your concentration on yourself only. But, if I heard somebody’s cellphone ringing, for example, I’d tell them that their phone was ringing. I often find myself not concentrating, I see too much of what’s going on around me—that’s the kind of person I am. I’m at least finally starting to understand this.
It seems that you had a very difficult time concentrating on yourself right before the final race in Rio, too.
There was really something mentally wrong with me the night before the final race. My attitude had been that it was a battle in which I either won a medal or died. It was because I was within reach of a medal, that I ended up thinking about what it would be like if I didn’t win one. I mean, all the athletes are there with this once-every-four-years stage as their target. The other athletes were all giving off that kind of aura, and I sensed it very keenly. I kept saying, “I’m going to win a medal!” But actually, I was feeling very anxious over what I was going to do if I didn’t.
Didn’t you feel the same kind of pressure when you were playing handball?
No, none at all. I just enjoyed playing handball.
After Rio, you returned to Japan with a bronze medal in hand.
True. But I hadn’t gotten what I really wanted. When I got the bronze medal, I thought, “I did it! I feel so rewarded!” But there, standing right next to me, was someone else getting the gold medal. I was very happy to win the bronze, but I had such a strong feeling of, “This isn’t what I want!”
Was there anything that helped your shift emotional gears so that you could focus on your next goal?
Things finally started settling down in 2017, and I was able to start training continuously without interruption. It was around then that I realized, “Hey, I can still run!” When you can’t train continuously, you begin losing sight of what your position is at that moment, and you start feeling anxious. Winning the medal in Rio received a lot, and I mean really a lot, of media coverage. My whole world changed, and I couldn’t keep up with what was going on around me. As far as I was concerned, that bronze medal was already something of the past. I had no intention of clinging on to that achievement. I had already had enough attention. I wanted to move onto the next goal. This year, we have the World Championships taking place. That’s where my attention is focused right now as I train.
What’s your goal for the upcoming World Championships?
To win a medal, of course. I hope to mark a time in the 58-second range, but that means that I have to better my current record by nearly one second. I mean, it’s not going to be easy at all (laughter). I can’t imagine being able to achieve that yet, but I think that it would open up a new world for me if I achieve it.
How close do you feel to the world record?
Not close at all. Not yet. Yunidis Castillo of Cuba, who was in the final race in the 100-meter sprint in Rio, is the current world record holder. She won a gold medal in all three sprints that she entered in the 2012 London Paralympic Games—the 100-meter, 200-meter and 400-meter sprint. I hope to get, even if only slightly, closer to her achievements.
There are some Paralympic events in which the Paralympic record is better than the Olympic record. We expect to see that happening with more events in the future. What kind of a future do you envision for Para sports?
I was able to win a medal in Rio, but I don’t want anyone saying that I only won a medal because it was the Paralympics (and not the Olympics). While it is true that the differences between Olympic and Paralympic records are very obvious in athletics events because performance is gauged in terms of time records, no Para athlete has set any kind of limit to his or her own abilities. It would be wonderful if people start looking at a Para athlete and genuinely think that the athlete is awesome. My hope is to become an athlete who can help narrow the gap between the Olympics and Paralympics. I do think about things like that a lot.

Born 1994 in Hokkaido, Sae Tsuji is a sprinter with a congenital limb deficiency of the right forearm. Her Para athletics impairment classification is T47. Ms. Tsuji started playing able-bodied handball when she was in elementary school. Her achievements as a handball player include reaching the quarterfinals in the All-Japan Inter High School Championships, and competing in the National Sports Festival. She switched to Para athletics while a student of Nippon Sport Science University. Ms. Tsuji placed sixth in the 2015 IPC Athletics World Championships. The following year, she won the bronze medal in the 400m T47 at the Rio 2016 Paralympic Games. Ms. Tsuji is currently a graduate student at Nippon Sport Science University.